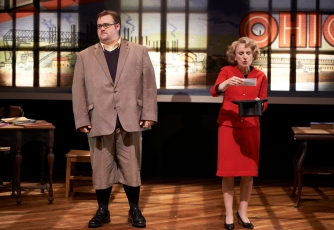 Raymond McAnally, the male lead in the Jeffrey Hatcher’s comedic play Mrs. Mannerly, reveals tips on playing multiple characters, connecting with the audience, and his most memorable roles as an actor.

Q: What is your favorite part about playing multiple characters, both in Mrs. Mannerly and in general?

A: I’m a “research nerd,” so I love building characters and piecing together my choices using the playwright’s clues. For me, it’s important to find the joy in playing each character and bringing the audience along for the ride.

Q: What is the most challenging part about playing multiple characters, both in Mrs. Mannerly and in general?

Q: In what ways can you relate to the character of Jeffrey Hatcher in Mrs. Mannerly?

A: Some obvious ones would be that I was overweight with glasses (at least by age 10). I was certainly accused of marching to my own beat, like Jeffrey I imagine. I was always writing, drawing, and doing something artistic. I also loved to “people watch” and make up back stories about who they were, where they were from, and what they thought.

Q: What tips or secrets can you give to the audience about playing multiple characters at once?

A: Separate them out, working on each one as it’s own person.  The playwright will help you, so look for clues as to the “keys” to the character.  For some it’s the voice and others it’s their physicality.  Don’t worry about “making them all different”, simply make them specific.  Make strong choices and trust your director to help you shape the rest.

Q: What has been your favorite character to play in your career thus far?

A: As a character actor, you find these characters that you just connect to and enjoy playing to the point it’s almost shockingly easy to be them. On stage, playing Ellard in The Foreigner at the Playhouse is one of those roles for me, as well as playing this role of Jeffrey Hatcher. It’s funny that they have both been the two shows I have done in Cincinnati.

Q: Do you have a preference between performing live on stage or in front of a camera?

A: For me, nothing beats connecting to a live audience, but I’ve found the skills it takes, to perform well in either medium, helps me with the other. For example, if I am as internally specific and intimate with my stage roles as I have to be for my onscreen roles, then the character is just that much clearer. Also, if I can walk onto set with solid choices, but still open to direction like I am during a theatre rehearsal process, then we’re going to have some fun shaping a great character’s journey from start to finish.